Historically, hair has been a source of pride for men and is a distinctive feature that adorns and protects. Hair is also one of our most variable characteristics. Huge differences in color, density, texture, length and style make races and ethnic groups different.

Taking into account that all human hair have the same basic structure, it varies considerably in size, shape and density, depending on its location and state of development. Two types of hair are recognized.

They are soft, hypopigmented, almost invisible hair. The veil hairs are distributed throughout the body surface and are difficult to be seen if you do not have an appropriate magnifying glasses.

They are longer, thicker and have a variable pigmentation. The subtypes of terminal hair are found in eyebrows, scalp, mustache, beard, armpit, chest and pubis.

In general, 5 million hair follicles cover the human body at birth. Normally it is accepted that new follicles cannot develop in adult skin. Hhowever the size of the follicles can change over time, initially with the influence of androgenic hormones. For example, in male adolescents, veil hairs on the face can become hair on the ends of the beard and mustache. In contrast, the terminal hair on the scalp can change to veil hair in men with male pattern baldness.

A general term for hair loss, resulting from a decrease in visible hair. There are numerous types of alopecia; some are permanent and some are reversible.

The vast majority of consultations correspond to androgenetic alopecia.

Or known as “common baldness”, is characterized by the progressive and visible thinning of the hair of the scalp in men genetically susceptible and in some women.

Thinning is caused by the gradual miniaturization of the hair follicles. Miniaturization results from the conversion of large (terminal) hair into small, inconspicuous and depigmented veil hairs.

We can classify them as surgical and non-surgical, but we must bear in mind that they go hand in hand, even when performing a surgical treatment you need to accompany clinical treatment to obtain a better result.

Within the surgical treatment we can perform the classic technique (strip or FUT), FUE technique (follicular unit extraction), or combined.

In this technique, which is performed under local anesthesia, we take from a donor area that would be in the posterior region of the head, an ellipse that is of variable size resulting in a linear scar that is easily hidden by the hair; that scalp ellipse is cut microscopically to obtain the follicular units that are going to be implanted.

Advantages of this technique:we can obtain more follicular units, it is not necessary to cut the hair.

Disadvantages:the resulting scar, although it is easily concealed, and the number of personnel required to cut the follicular units.

In this technique, a micromotor with a series of punches is used, and follicular unit is extracted per follicular unit, with minimal circular scarring remaining almost imperceptible. This type of techniques can be used through cutting-edge technology such as robotics

Advantages:there is no linear scar.

Disadvantages:you have to shave your head, you can get less follicular units and the time depending on the surgeon can be greater.

It consists of the mixture of the two previous techniques, and is used in more advanced baldness. With this technique we will have many more follicular units, but also the duration of surgery lasts considerably.

The results can be perceived 3 or 4 months after the surgery, but the visible result is in the 7th month when the hair has grown. 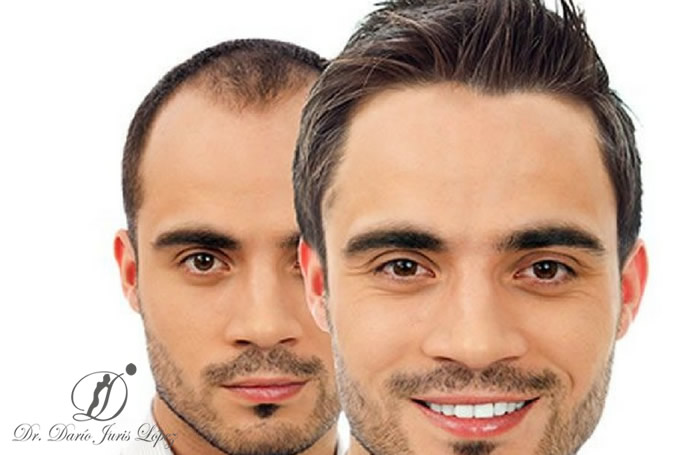